The M4 Sherman tank. Much loved, equally maligned, common wisdom states that it was not intended for the uses it was put to.

Yeah, most of them had low-velocity guns that couldn’t penetrate the armor of a Panther or Tiger tank at range, and yeah, the Panther and Tiger could light up (literally) a Sherman at ranges a Sherman could not reach. However, Panthers and Tigers combined only made up about 30% of the German armor the Allied tank crews faced after Normandy. The Sherman could go toe to toe with any German armor up to and including the Pkw. IV series (though the Pkw IV with the long-barreled 76mm did out range the Sherman’s 75mm).

Having said that over three years ago, subsequent research has shown that what follows and I had written back then is mostly inaccurate:

“But in line with the Armored Command’s battle doctrine, the Sherman was never intended for armor-on-armor engagements; that’s what tank destroyers were intended to do. The tactical application of the Sherman was a holdover from the WWI philosophy of using armor as infantry support like a mobile pillbox to break through enemy lines and create havoc and destruction behind the lines, or as a mobile fortification covering infantry on the advance.”

For an interesting look at the Sherman, its history and role, check out this YouTube video:

So it looks like I’m not the only to think the M4 series is a good tank! (And while you’re at YouTube, look for, “Oh bugger, the tank’s on fire.” QUITE fascinating.) The one major advantage the Sherman had over the Panther and Tiger (other than sheer numbers available in the field) was that it was reliable and a lot easier to work on. Panthers and Tigers were much more complicated machines and of all the terms tossed at the Sherman, “complicated” is not one I’ve encountered.

Being an evolutionary design, it carried over many traits of the M3 Lee…both bad (high profile, thin armor) and good (a well-developed drive train with robust components that are widely interchangeable). Its turret traverse would spin a turret faster than most German tanks; getting the first shot on target makes survival easier, and given that 70% of its armored adversaries weren’t Panthers (or Tigers which were MUCH rarer), that first shot stood a good chance of ending the encounter.

The major reason a Sherman would light up so easily and burn was not because it was gasoline-fueled, it was discovered to be the result of where the main gun ammunition was stored in the “dry-stowage” hulls where the ammo was stored high on the inside hull, leading to “wet-stowage,” where the ammo is encased in water jackets and stored on the floor of the hull. With dry-stowage hulls, any shot that penetrated would likely result in setting off the stowed ammo; wet-stowage hulls cut down on that happening drastically.

By the end of its production run with the M4A3E8, though the armor was still thinner than its adversaries, a great many of its problems were sorted out, it had an adequate gun, and the ride of the last suspension design was a lot smoother. The Army liked the A3 series enough to keep it in service after WWII and a number of them saw duty in Korea (and note the comment in the above video regarding the M-26 versus the M-4!).

There were about 50-55,000 of them made; as one clever sod once stated, “55,000 Shermans and 54,999 different from all the other ones.” That’s because parts interchangeability was profound. The transmission of a Sherman built in 1941 would fit a Sherman of an entirely different variant built in 1945 (as would many other major components). Disabled tanks would be scavenged for parts in the field to keep less damaged Shermans in service and fighting.

Some Shermans (M4 and M4A1) had a Cyclone radial engine (a holdover from the M3 line of medium tanks and was the reason the hull of the Sherman had such a high profile), some had the Chrysler “multi-bank” engine (M4A4) which was actually five engines built around a common crankshaft; go ahead, try routine maintenance on that one without pulling the power-plant, some had a 1000 cu. in. Ford V8 (M4A3 and M4A3E8), and though most Shermans were gasoline-fueled, a few were even diesel (M4A2 and a radial-engine diesel, the M4A6 of which only 75 were built).

Most had a low-velocity 75mm gun. Some were armed with a 105mm howitzer. Finally, a high-velocity 76mm gun was fitted (the 76mm, oddly enough, wasn’t as popular as the 75mm was, mainly due to the absence of a good high-explosive round). And all of that doesn’t take the British Shermans, called “Fireflies” into account with the 17 pounder gun. (And I haven’t even mentioned what the Israeli army did with them! Google M51.) There were even flamethrower variants the troops called “Zippos.” Some tanks had cast upper hulls, some had welded flat plates (of two varieties) and some had the forward upper cast hull welded to flat plate rear upper hulls. Most turrets had what’s called the “pistol port” (though it was actually intended to toss empty cannon brass out of) though many did not. Earlier turrets had a low bustle and no loader’s hatch; later ones had a high bustle with a loader’s hatch (and there were two variants of the loader’s hatch!). Early turrets had a flat, two-piece commander’s hatch, and later ones had a “vision block” cupola with a single hatch. Some turrets had applique armor over the gunner’s position, some had it cast in at the foundry. Two different gun mantles were fitted, early and late (of course) with an entirely different one for the 76mm gun. Early transmission casings were three-piece units bolted together (another M3 holdover), later ones had a one-piece cast casing and those could have rounded or pointed noses. And all of these parts were interchangeable!

And I haven’t even mentioned the assault variation of the Sherman M4A3E2 with a ton (actually, a couple of tons) of thickened armor or self-propelled artillery built on the Sherman chassis…

Three different types of suspensions, five different designs of tracks, some with applique armor over ammunition storage bins (dry-stowage, which had one design of engine air cleaners) some without (wet-stowage with different design and location of air cleaners), two different turrets, three different guns (75mm, 76mm, 105mm howitzer) and none of that takes into account individual crew modifications or field-expedient modifications (like the hedgerow cutters welded to the nose to keep them from hanging up on the Normandy hedgerows after the D-Day landings at Normandy) OR the specialized variants like the dual-drive Shermans intended for amphibious landings, tank retrievers (fitted with cranes), and on and on and on.

All the above just scratches the surface of what was done to the “basic” Sherman tank. So what the hell is a modeler to do? Model 54,999 tanks? (Even I’m not quite that crazy.)

I decided that I would do maybe five. An M4 (welded-plate upper hull), two M4A1s (cast upper hull armor), an early one with direct-vision slots and a later one without, all of these with low-bustle turrets and the Cyclone radial engine, the M4A3 which has different welded flat-plate armor from the M4 (less of an angle to the front glacis plate which was easier to build and had less places an incoming round would find a vertical surface to penetrate) and the V8 engine (made by Ford, 1000 cu. in., 1000hp and 1100 lb/ft of torque from off-idle to 2500 rpm, aluminum, DOHC, four-valve per cylinder, twin carbs) and the high-bustle turret with the loader’s hatch, though there were also low-bustle turrets with loader’s hatches, too. And finally an M4A3E8 wet-stowage 76mm with the advanced suspension, considered by many to be the best of the Shermans (I may also do one of the British Firefly variants).

I decided to start with the M4A3… It was the variant the Army liked most and retained for use and upgrades after WWII. 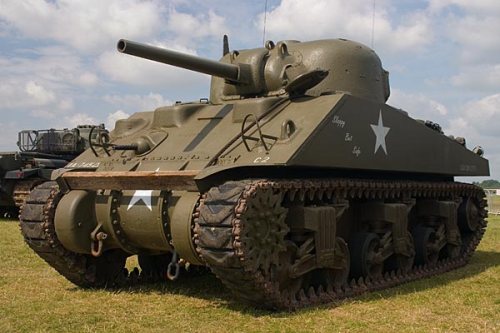