With the body buttoned up the next task is all the tedious, small, details. The first detail I added was the protective screen in front of the radiator. I used the old Scale Link (whose PE line has moved to http://www.scalelinkfretcetera.co.uk) octagonal PE mesh for that: 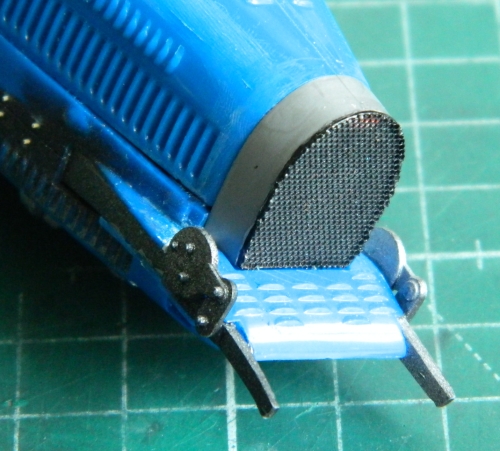 No doubt you’ve noticed that the engine covers look like they’re in place. Well…not really. I tacked the kit-supplied engine cover in place to serve as a mask for the engine bay. That part will be replaced later on.

The racing version didn’t have the windscreen for the passenger. In racing form, that’s frequently where the rear-view was placed. I used .005″ (.127mm) copper shim stock to form the support. The white plastic (which on the actual car was part of the support) is also .005″ (.127mm) and the two fasteners are a couple of Archer Resin Rivets from set number AR88001: 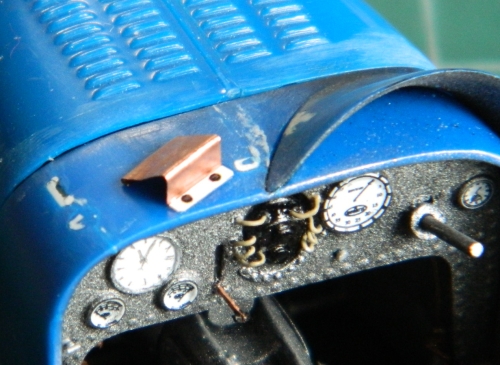 I also finished the plug for the unused attachment point for the tailpipes:

And having put it off for as long as possible, I started running what were the safety wires on the actual car. I didn’t have a wire quite the size I was looking for and ended up using wire I took out of an old power cord of a diameter of .0065″ (.00026mm) and used that. I preformed the wire using a stub of the stretched sprue I used for the fasteners:

Did I mention I did this a lot? And this was only one side…there are, obviously, two:

The photo doesn’t show it well, but I hit the wire with my go-to steel paint, Humbrol #27003. The plan (giggles) was to paint it “steel,” over-paint it with black (for shading) and then the color coat. The next step in that “plan” (giggles some more) was to use the acrylic thinner to wash away the black and color coat to expose the steel. Clever plan, right? No. Wrong. Even though the “steel” was enamel, the acrylic thinner lifted it off the wire and exposed the copper under the paint. Well, bugger. Okay…I’ll paint it “steel” later:

While I was in a painting mood, I loaded the airbrush with Tamiya XF-16 Flat Aluminum and painted the prepared suspension parts (as well as the windscreen frame and radiator-mounted coolant temperature indicator): 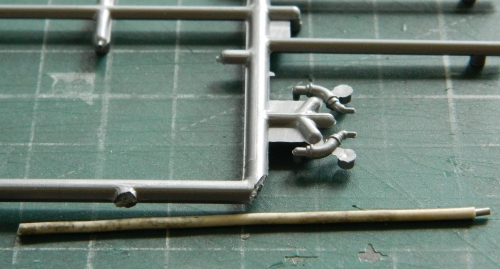 While I was fitting the exhaust system I noticed that where the pipes join was and unacceptable gap. .010″ (.254mm) styrene scrap filled those:

And with that, there’s nothing left to do but load the airbrush with flat black and do the underside and halfway up the sides with white over the top and halfway down the sides: 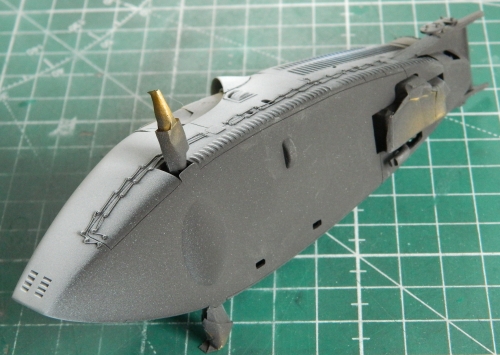 Then it was time to apply color which, being a Bugatti, was of course blue. I mixed a custom blend of Tamiya paints comprised of XF-8 Blue (5 parts), X-14 Sky Blue (2 parts), and X-2 Gloss White (1 part). (Handy tip…whenever you custom mix paint be sure to mix extra. It makes touch up painting SO much easier.) Looks good to me:

Since I’m doing a racing version, it needs a number. Before adding decals, clear gloss had to go down first:

And now we’re at the “later” referred to above regarding the color of the safety wires. So my first mistake was thinking I had to paint it…which I tried. Nope. Failed miserably. I thrashed and flailed for a bit before my brain rejoined the fray. Paint? Nah. Use a silver-colored pencil. Worked like a charm and was SO MUCH EASIER to do than paint was:

Pretty much the entire time I’ve been working on the body (and stuff) the tires have been hanging over my head (metaphorically…I’m actually much taller). The kit-supplied tires are vinyl. I don’t know why (not being a chemist) but I’ve seen horror stories where the composition of that vinyl has caused the styrene of the rest of the kit to decompose. Oh. Yeah. And the vinyl is far too shiny. I painted the vinyl tires with Tamiya’s XF-86 Clear Flat on the sides and to act as a barrier between the vinyl and styrene I coated the inside of the tires where they come in contact with the styrene with Tamiya X-22 Clear Gloss (and hopefully that does the trick). And having let the clear gloss for the decals cure overnight, I added the number: 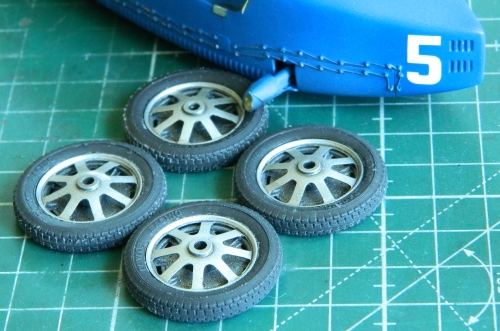 Next I get to wear and weather the body and maybe even start assembling.