Since the US deployment of light tanks in WWII, the M3 variants and the M5 variants, crews wanted something that offered more protection and had a larger gun. Being that both the M3 and M5 were essentially developed designs of a mid 30’s design, neither the M3 nor M5 could mount a larger gun. And seeing as the light tank doctrine had to be modified to fit the tanks’ capabilities, such as they were (or perhaps less inaccurately, deal with their shortcomings), the North African campaigns showed that any tank that relied on a 37mm main for defense would lose and that light tanks could not effectively be used in any other role than scouting. One “funny” person suggested that the only effective use of a light tank was to discover where anti-tank guns were situated, which, though I suppose offered a tactical utility, was rather rough on the crews.

For reasons I certainly don’t understand, the US Armored Force remained convinced that light tanks could be useful. (In addition to thin armor and a tiny gun, the armor of M3s and M5s wasn’t proof against any of the anti-tank guns.) So the M3 morphed into the M5 but shared with the M3 a high profile. A thinly armored tank with a high profile was easy to see and knock out. The M5, however, didn’t use a radial engine, which is why the M3 light tank, the M3 medium tank, and the M4s all shared the same flaw of being tall tanks. Instead of designing a new hull, the M5 used a variation of the M3’s basic hull design, even though the M5 used a pair of Cadillac V8s instead of a tall radial engine and could have benefited from a new hull design with a lower profile; they wouldn’t have had any greater firepower or thicker armor, at least they wouldn’t have been as tall.

Finally realizing that the M3 and any development of the M3’s basic hull design were tactically ill-advised, a new requirement was drawn up (1943, I believe). The requirement specified that the new light tank should not exceed 20 tons in weight and be capable of mounting a 75mm gun. The US Armored Force also decided that the four-man crew of existing light tanks was insufficient to combat efficiency and instead stipulated that a five-man crew was required, adding the additional crewmember to the turret crew.

With the pressures generated by an on-going war, as much of the M5 that could be used would be incorporated into the new design. The Armored Force remained convinced that a light tank would be useful for reconnaissance.

Cadillac had been working on an enlarged hull design intended for self-propelled artillery and incorporating as many of the M5A1 components as possible. Chrysler (then a part of GM) used the Cadillac-designed hull and offered a new design, the T24. It used a modified configuration of the M5A1’s Cadillac engines feeding a transfer case to combine the output of two engines into one drive shaft as the M5A1 had, feeding the M5A1’s transmission in the nose (the major difference from the M5A1 was that the new design used a manual transfer case instead of the M5A1’s automatic transfer case which turned out to have problems) as well as larger radiators for improved engine cooling. The original design required a larger turret ring to handle the 75mm gun and rather than make the body of the tank wider, instead the design employed sides that sloped outward at the top (and having an angle to the face of the side armor offered a slight improvement over a vertical side without increasing the vehicles overall weight of additional armor). The Armored Force also wanted wider tracks for decreased ground pressure (lessening the likelihood of the new tank becoming mired in muddy conditions) and designers moved away from the volute-style suspension of the 30s (which had become about as advanced as that archaic design could be) to the more modern torsion bar suspension used in more modern tanks of the Germans and Russians (torsion bar suspensions are still in use on tanks today). As a result, the track used on the M24 during WWII was the T72, a single-pin, center guide, metal shoe, track with a width of 16″. (Post-war track was changed to the rubber chevron, double-pin, T85E1 shoe with a width of 14″. Rubber tracks were easier on paved roads, a consideration of Occupation Forces in Japan.)

Even with the larger turret ring, using the 75mm of the M4 Sherman didn’t work as intended. However, a light-weight 75mm, the T13E1, with a different recuperator and shorter stroke design to absorb the recoil of the 75mm had been developed for the B25G and H models. Though the light-weight T13E1 of the B25 shot the same round as the 75mm of the Sherman, the barrel was shorter which resulted in an even lower velocity of the round, already considered a low-velocity shot. The initial gun, the T13E1, was taken from stores already produced for the B25 ground attack variants. Later on, a purpose-built gun for the M24 was produced and designated as the M5. The only way to tell the T13E1 from the M5 tube was that the former had a pair of rings around the barrel sleeve to engage the recoil mechanism of the B25 installation.

The M24’s combat debut was at Bastogne during the winter of 1944 (aka, the Battle of the Bulge) when a pair of M24s intended for 744th and 759th Tank Battalions were intercepted by the 740th Tank Battalion that had arrived in-theatre without any tanks. They were first deployed in Company D at Remouchamps on December 20, 1944, and saw action in the fighting for Stoumont and La Gleize.

The M24 was a profound improvement over the M5 and M5A1s that they replaced and the crews liked them. From what I can tell, the major complaint of the new tank (and probably every tank fielded) was its limited ammunition loadout (not at all uncommon for an M24 crew to go through the standard ammo load twice during an engagement…talk about awkward!). Mobility was praised as was its ability to get into (and most importantly, out of) places neither the M4 because of its size, and the M5 series because of their higher ground pressure, could. The first two tanks were pressed into service without the crews being trained in them. However, due to the mechanical similarities of the M5 series and the similar gun of the M4 75mm, they seemed to have no problem putting the new tank into service.

The M24 was thought to be the tank to use in the invasion of Japan because of its lighter weight (though a bit over the 20 tons initially specified) than the M4 series in consideration of the bridges found in Japan. Tests were conducted to see if the tank could be made to float, thereby decreasing the need for LSTs, and the flotation devices (including 28.5″ grousers bolted to the T72 track to increase propulsion in the water) developed for the M18 were successfully (all terms being relative) adapted and tested between late 1944 and early 1945.

The Enola Gay and Bock’s Car changed all that and the program was dropped. However, the mounting pads for the flotation devices on the nose and rear of the tank had been incorporated into the production lines and never dropped. I found one reference, “M24 Chaffee Walk Around, by David Doyle, ISBN 978-0-89747-592-1 that gives production numbers when the flotation mounts were added to the hull, the only problem being that different production numbers for the start of those additions. On page 12, he states that Cadillac-built M24s started adding the mounts at #1101, and then on the next page, 13, he states that Cadillac started adding the mounts at #713. So that is hardly informative! Either way, early production M24s, therefore, had the rings around the barrel of the T13E1 gun and no flotation mounts whereas late production M24s didn’t have rings around the barrel and had the float mounts. Some of the early M24s also had U-shaped stirrups added to the lower nose and rear plate and some did not. None of the M24s with the flotation mounts show these stirrups.

As mentioned earlier, M24s were used by US Occupation Forces in Japan (my father crewed, and later commanded one, and finally became a platoon commander).

The T34/85s that the North Koreas brought with them had been good enough to stop the Wehrmacht’s Panzer IVs, Panthers, and even Tigers. Encountering M24 light tanks, the only tanks we had on-hand that were close enough to throw at the North Korean invaders, posed no problem for the T34/85 crews (even as poorly trained as they were…which would significantly change when M4A3E8s and M26s arrived later). (The last tank my father had shot out from under him he was the only survivor of the experience, largely because he was standing in the open commander’s hatch when his tank was hit and destroyed. The explosion blew him clear of the flaming wreck.

Post-WWII, France was the largest recipient of M24s and used them in Indo-China (Vietnam). The Vietnamese army also used them (too frequently in coups, which earned the M24 the nickname of “ballot boxes).

During its initial uses in WWII, the M24 was considered by some as America’s best tank (as if that determination can be made!). Side-stepping that debate, it was certainly the most advanced armor of the European Theatre that the US fielded until the arrival of the M26. 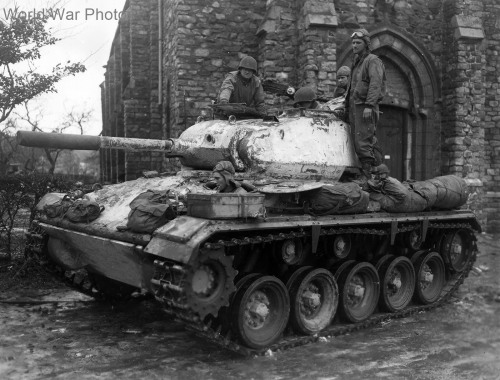 M24 of the 18th Cavalry Squadron at Petit-Thier, Belgium February 1945