Good news. I had absolutely no problem adding dirt and some wear after the hull had been assembled.

The next task was to get the hull ready for paint. Small hull, few openings, easy job: 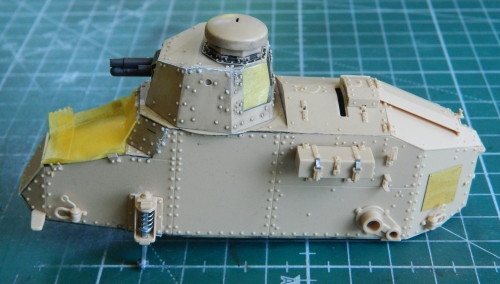 Masking the suspension was a little finicky but nothing serious. What was too annoying to mask could be touched up later, as most of those parts would be hidden by the tracks: 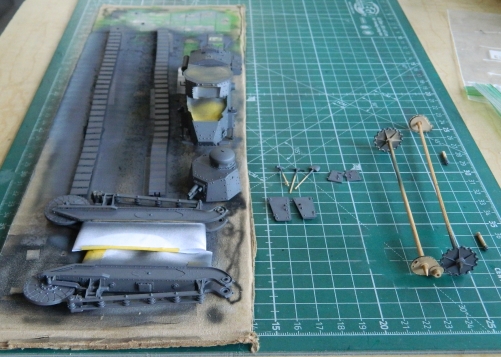 Hull and turret parts were pre-shaded with Tamiya XF-1 Flat Black. The tracks were painted with my custom mix for “gunmetal”, Tamiya X-18 (5 parts) and XF-20 Medium Gray (4 parts):

For the overall base coat I used Tamiya XF-57 Buff: 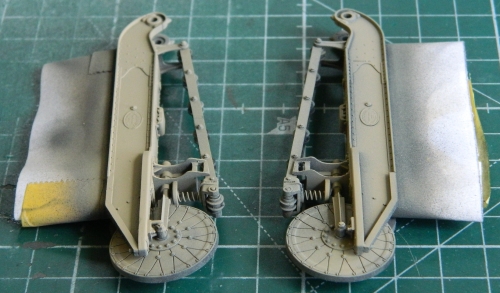 To replicate wear of the tracks’ surface, I used a cotton swab dipped in acrylic thinner to “wear” the surface so that shiny steel showed through. Then I mounted the tracks onto the suspensions, gluing each track shoe to the adjacent shoes as well as to the wheels of the suspension:

With the base coat down, I copied the camouflage pattern using a soft touch with a standard pencil to define the two added color blocks. I used Tamiya XF-58 Olive Green and XF-64 Red Brown. In adding the camouflage, I departed from my usual method of airbrushing it. The first combat use of tanks was at the Somme, September 15, 1916. I have no way to know whether or not the camouflage paint was added at the factory. I decided to assume it was done in the field. In 1916, power tools of any sort were not as portable as over a century of technological advances have made them. I know compressors were in use (isn’t that what an internal combustion, or Otto-cycle, engine is essentially?), I just don’t know as they were portable (which I rather doubt). I do know that a bucket and a brush are portable, so I made the red and green paint obviously applied by brushes (by brushing the colors on): 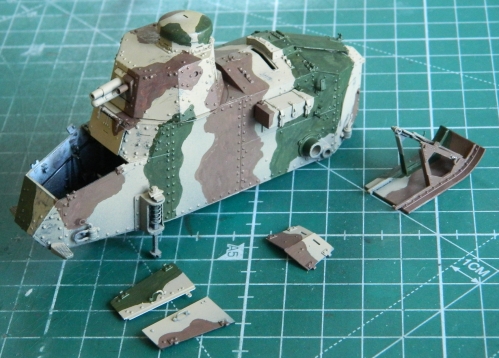 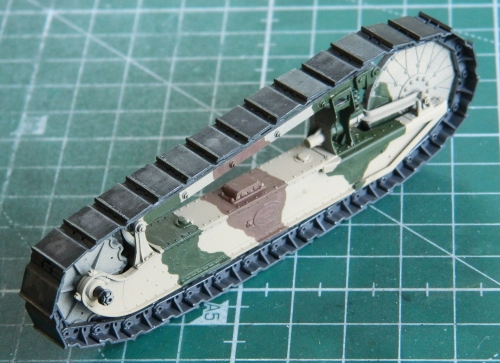 Then the suspensions were glued to the hull as was the unditching skid:

Then all the other small external bits like the engine vent, tools, and hatches were glued in place (and I got a little ahead of myself by adding wear at this point…usually I wait until the decals are on) (oops): 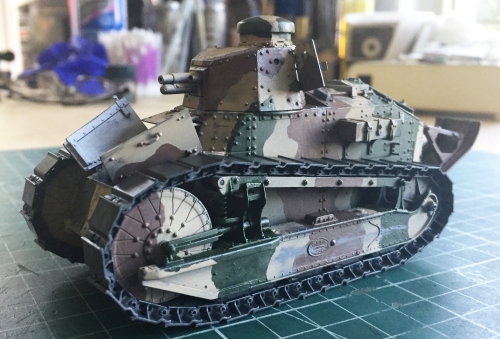 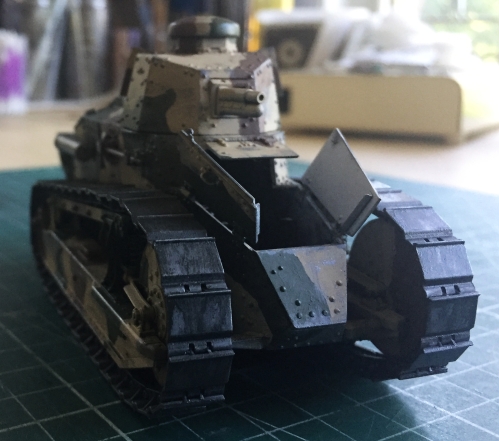 One thing that just looked incorrect to me was the angle of the driver’s upper hatch. It wasn’t open enough to clear the clam-shell hatches. I worked it loose and raised it until it would just clear the hatches. And then I added decals.

The markings are for a tank of the  2nd Platoon, 1st Company, 344th Tank Battalion, 304th Tank Brigade, US Army, Verdun, October 1918. The decals came with the kit and are another set of wonderful decals from Cartograph. There were only six decals. They went on easily, snuggled down well (I used Walther’s Solvaset because there were rivets and depressions where the turret decals went. Then decals handled the Solvaset without any problems and the carrier film vanished without an overcoat of clear flat.) (More decal heresy.)

Wear, scrapes, and nicks were applied using Humbrol Steel #27003. Then the decals were toned down using pastels, which also added dirt and smudges. I considered adding mud to the tracks (and tank) but the coin came up tails so I didn’t. 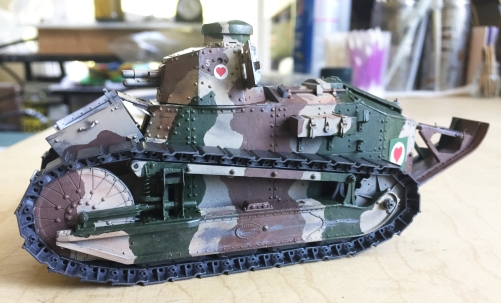