The A-37B was a development of Cessna’s T-37 trainer, aka, “Tweet.” Its cockpit layout was unusual in that the crew sat next to each other instead of the more common tandem seating. The Air Force wanted a counterinsurgency platform to deliver ordinance to a surface target and approached Cessna with the intent to beef up the T-37 for the ground attack role. The initial evaluation was done using a pair of T-37C aircraft and though promising, the T-37 needed stronger wings (gotta hang the ordinance somewhere), the ability to carry more fuel, a multi-barrel gun (General Electric GAU-2B/A 7.62 mm with 1500 rounds at 3000 rounds/minute), combat-capable avionics, and tougher landing gear for rough-field operation. To get all the increased weight into the air, Cessna doubled the aircraft’s power by replacing the original Continental J-69 engines with General Electric J85-J2/5 turbojet engines.

The Air Force doesn’t seem (even to this day) to be all that interested in small, simple, aircraft. Interest waned in the early 60s in light attack aircraft. But as you know, the early 60s became the mid-60s and Vietnam heated up considerably.  The two trial aircraft had been “retired” to the National Museum of the United States Air Force at Wright-Patterson Air Force Base. Light attack was being performed by the A-1 Skyraider, a large propeller-driven attack platform developed in WWII and used during the Korean War. The Air Force (and Navy and South Vietnam) was losing a lot of them and was looking for a replacement and revived the A-37 program. The second prototype was taken from Wright-Patterson and a contract was let to Cessna for 39 “YATD-37D” aircraft (quickly changed to “A-37A”) to evaluate the platform under combat conditions.

Twenty five A-37As were sent to Vietnam in August of 1967 under the “Combat Dragon” evaluation program and were operated out of Bein Hoa Airbase and were operated on “air commando” missions. The program was a success with the A-37A flying thousands of ground-attack missions with no losses to enemy fire (two were wrecked in landing accidents), and it was decided that for the aircraft to be fully combat capable, some changes were needed. The A models lacked range and control response became heavy in the attack approach as well as not having a redundant control system. The Air Force issued a contract for 57 of the improved aircraft, designated A-37B, and quickly raised the amount to 127 (ultimately 577 would be built). All A-37B were new air-frames.

The A-37B was a much more robust aircraft and weighed roughly twice what the T-37 did. To get the increased mass airborne it was fitted with new engines, the General Electric J85-GE-17A engines, canted slightly outward to improve single-engine operation (it was not unusual for the pilot, as most were operated by a single crewman, to cruise on one engine to conserve fuel and extend range). The B models were also fitted with nylon flak curtains inside the cockpit, armored ejection seats, could tolerate 6gs (an increase over the A model’s 5g), a fatigue life of 4000 hours (combat experience showed that 7000 hours could be tolerated), was fitted with redundant elevator controls, modified control surfaces to improve handling, and self-sealing fuel tanks. A mid-air refueling probe was added to the nose (the feed pipes wrapped around the front of the cockpit) of probe-and-drogue which was a departure from Air Force equipment which was usually configured for boom refueling. Avionics were updated, the instrument panel reconfigured for easier flight from either seat, revised deicing inlets for the engines, and hardier landing gear. None of the 37 family had pressurized cockpits, requiring them to stay below 25,000 feet.

The A-37B was very effective at close-support. Due to ease of maintenance, the aircraft only required two hours of maintenance per hour of flight, lower than more complicated platforms, turn-around time was low and sortie rate was high with 1000 sorties per month not being unusual. Because of its small size, it was more difficult to hit with ground fire, and due to its low operating speed (and high loiter time) its bomb delivery accuracy average was 45 feet. 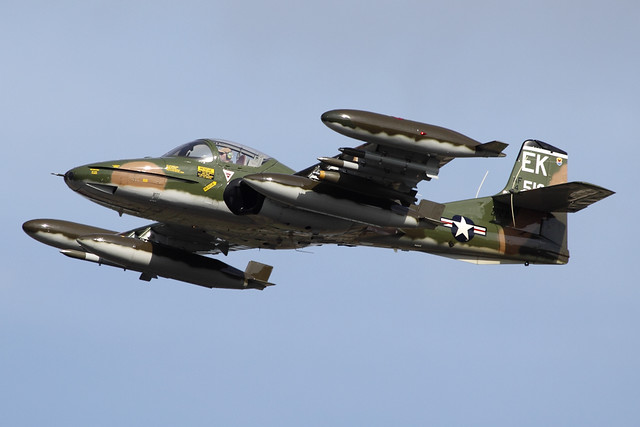