Every so often I get to a point where in order to do this, I need to do that first. Sometimes I find myself where in order to do either, I have to do the other one first. Since either approach has problems with it, it turns out not mattering; cut the knot, Gordon, and proceed…and that’s where I’m at presently with this.

With the landing gear started, I decided to start adding things to the bays. I have no idea what this Mystery Bit does, but it’s visually prominent so I copied it, one for each bay: 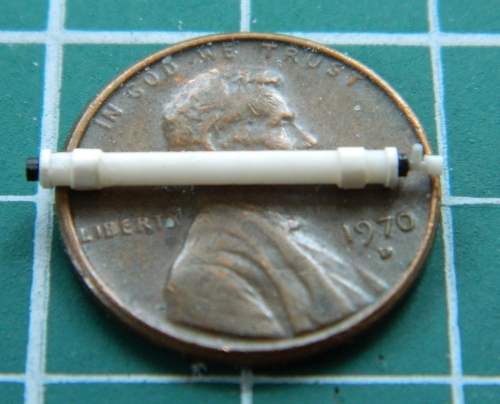 The hydraulic cylinder that extends and retracts the landing gear mounts on a cross brace which rotates to maintain alignment:

I made both of them and discovered during the trimming process that I’d made them too thick. I made them again, just more appropriately sized:

With the cross brace done, I needed to make the hydraulic cylinders. However, in order to make them to the correct length, I found myself far too short of hands. I had to brace the landing gear strut in place, and I had to hold the cross brace in position, and I had to align the cylinder. Right… Since I couldn’t think of a way to do all that with only the usual quantity of hands, I decided to make the cylinders so that I could adjust their lengths later when the landing gear was permanently attached, just the way I did for the hydraulic cylinders used with the canopies. That started by drilling out the plastic rod being used as the body of the cylinder to the diameter of the plastic rod being used as the ram:

This will allow the ram to slide and enable me to adjust length. Added a few details and here are the hydraulic cylinders next to the kit-supplied part:

Somehow, the trunion broke on one of the landing gear struts, so that will get fixed:

I started adding the various lines and as I was doing so, I realized that I was going to need to mount the cross brace about now because care would be needed so that I didn’t put things in that would prevent me from putting the cross brace where it should be. But I couldn’t do that because I only have two hands. What I needed was some way to mount the cross braces temporarily, but allow them to swivel so that they can be aligned relative to the angle (and length) the hydraulic cylinders need. My way around that particular problem was to hold the cross braces in position, drill through the side of the landing gear bay and the end of the cross brace, and that would allow me to put a pin (or wire…this isn’t that large) in there to hold the cross braces in place and allow them to swivel so that later on I can add the hydraulic cylinders with the alignment I want (and, hopefully, that’s correct). Once it was drilled and the wire pins in place, I used tape to keep the wires from falling out:

So yep…they swivel and by being in place, define where I can run lines and stuff:

And I ran lines and stuff:

With the bays done for now (yeah…there’s more to do, just not quite as much), I started making the extension limiters for the landing gear. I got to make them a few times since it seemed my Eyecrometer was out of calibration: 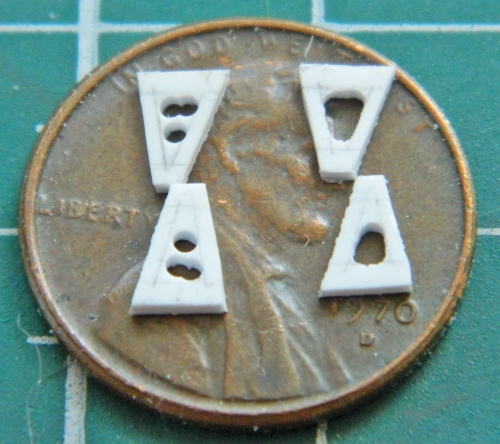 Eventually, I got the parts sized correctly and started making the mounts to get them onto the struts: 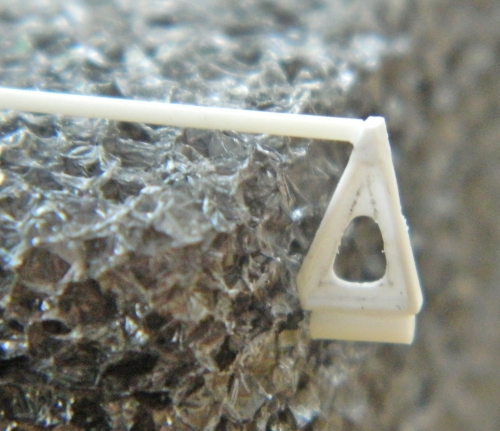 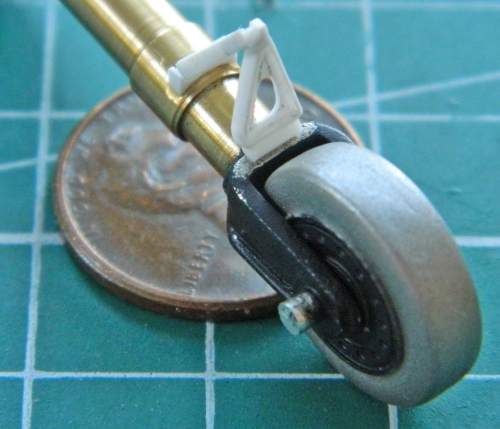 During this part of things, I discovered that the epoxy I used to fasten the yokes to the struts didn’t really hold well. I used superglue to reattach the yokes and (so far) things seem to be attached.

Needing to take a break from this stuff for a bit (more like a week), I wanted to address something that’s been nagging me since I started.

Decals that could easily be forty years old. I looked for AM decal sets and the only one I found, though they look really good, aren’t what I need. I do NOT want to try to wet the kit’s decals, the kit’s forty-year-old decals, and have them come apart. There are no replacements so if these things don’t work, I’m [DELETED EXPLETIVE]. Proper [DELETED EXPLETIVE].

I read a suggestion online that seems to offer me a way out of this situation. Scan the decals into a BMP file, edit and clean them up, then print them myself onto decal paper.

Well. Let’s talk about pixel-by-pixel tedium. I started with this scan of the kit decals:

Note how IMPOSSIBLE it is to see the white ink. I made a copy of the file and diddled its contrast and brightness:

At least now I can see where the white ink is.

And a word about white ink. My printer (and most, excluding Alp) doesn’t print white ink, lazy git that it is thinks (because don’t all inanimate objects think?!) that white paper is enough when white is needed. Yeah, not this time. So when white ink is needed, I have to use white decal paper. I had to cut and paste the decals that need to be white into a separate file, and then surround the white part (after editing the hell out of them) with a contrasting color (black, in this case, since that’s going to be the color of the fuselage*) so I can see the sodding things:

Then I used the low-visibility markings that #972 sports and copied-pasted-edited them into another file that gets printed on clear decal paper:

Once I’d done all the markings #972 requires, I diddled around until I got the scaling correct so that when these things are printed out, they’ll be the correct size.

If this works as well as it’s looking it might, I think I have solved the “old decal” problem…and could end up with the capability of making my own decals!

*There will be some fiddling and color adjusting needed to make the decals’ black surrounds disappear. The black around the decals is BLACK; the black of the model will be color-corrected so it will actually be a dark gray. Should be “fun.”