It seems I wasn’t quite as ready for prime time as I thought I was yesterday. Evidently,  my mind works (assuming that’s not an oxymoron) better earlier in the day than later. When I wrapped up last night, I really did think I was ready to throw paint first thing today…and then I sat down at the bench today. That’s when I saw all the things I wanted to prime, which is when I saw how few of those were ready to prime. Fine. Let’s get them ready! I mean really…how long could it take?

The answer to that question was about four hours.

But I wasn’t aware it was going to take that long, so the first thing I did was to prepare the radio antenna. No kit I’m aware of supplies one; they supply the antenna base and expect the builder to supply their own antenna. Okay, no problem. I’ll just stretch some sprue…uhm…how long a piece do I need?

My memory is a funny thing (mine is just hysterical). One of the bits it burped up was that in one of the Sherman kits, the length of the antenna is specified. There are four kits sitting on the shelves in the shop and of course it was the last one I looked in that had that information. 7cm.

Those of you who model know that the little tiny nose probes on a 1/48 scale aircraft are forever catching on things and breaking off. A 7cm antenna doesn’t exactly qualify as “tiny.” It didn’t require much imagination to realize that this aerial is probably going to break off frequently. What I needed was a way to dismount the antenna for those (RARE) times I’m going to transport this model.

Stretching sprue requires patience. Sometimes I can get the diameter I want in one pull. Sometimes it seems like it takes forever (as defined as a half hour) to get what I want. This time I was right in two. I cut the sprue and measured 7cm, cut it again, and glued it to the top of the mount. Because the plastic I stretched was already Olive Drab, I didn’t paint it: 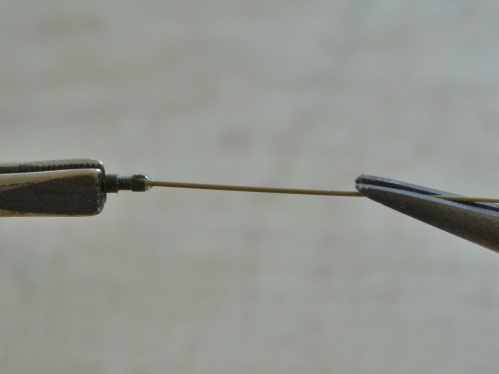 Now the antenna can be safely removed and put back on: 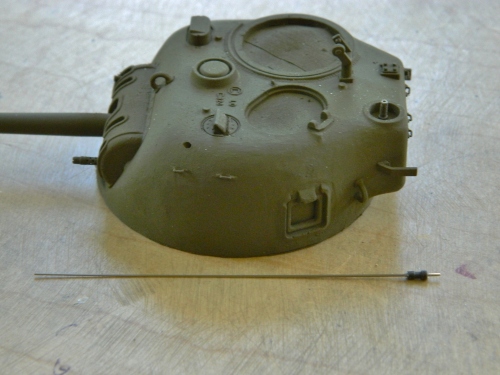 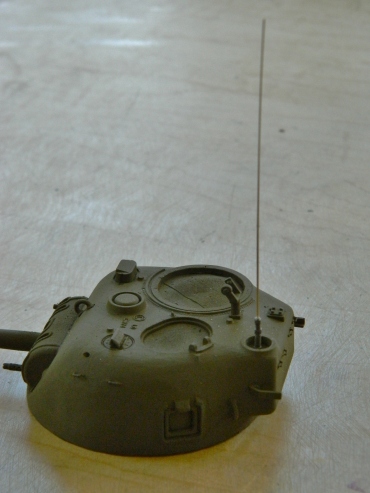 At this point, I was still assuming that I’d be able to not only prime what I wanted to be primed, but also be able to use the airbrush to do some detail painting. I turned my attention to the .50 caliber (1.27mm) on the turret top.

I’d already thinned out a kit ammo box and laid in an ammo belt from my spares stash, now I needed to run another belt from the gun down and across the top of the belt already installed:

Handling small parts is rough on those parts. I spent considerable time reattaching things, more time waiting for the glue to cure, and then repeating that process several times (exacerbated by remembering I’d wanted to add the butterfly trigger to the .50 caliber (1.27mm), and wasn’t THAT an exercise that ate up time. Tempus fugit indeed.)

So after four hours of all of the above, I was finally ready to prime. I used a rattle can of Tamiya’s fine gray acrylic and hit everything that wasn’t styrene and much that is. Different materials and colors reflect light differently. Another reason to prime something that’s had parts added that the kit didn’t provide is to get one type of reflective surface. This way modifications, things that had to be made to fit, brass, lead, aluminum, resin, and styrene, will all reflect light the same way and will show you what doesn’t work, what needs more work, and the ego-stroke of seeing you got it right: 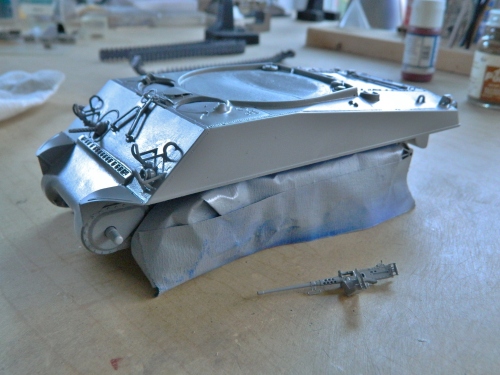 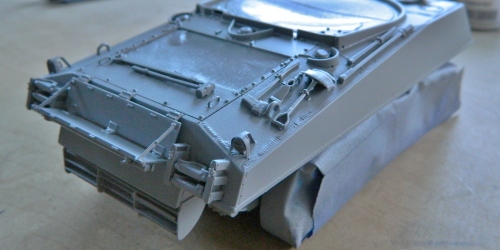 Now the primer will allow the subsequent paint layers some tooth. Tomorrow I’d like to get another detail or two added to the turret and then break out the airbrush to get some of the other details under paint, but that determination needs to wait for fresh brain and not be made with stale brain.