The P-38 Lightning was designed by Lockheed (Hal Hibbard was the lead designer working with chief engineer Kelly Johnson) to fit an Army requirement for a high-speed and high-altitude interceptor that was intended to shoot down enemy bombers.

There was a very interesting procurement officer and his name was Benjamin Kelsey. That the US Army Air Corps had the fighter it needed in spite of nobody’s interest in developing it (yes, I’m talking about the P-51) is due in large part to Lt. (at the time) Benjamin Kelsey. He was a very creative and inventive gentleman (because, by an Act of Congress, all officers are gentlemen) (back when Congress was capable and interested in acting) who used some very fancy verbiage to find funding at a time when Congress and the population was not at all interested in getting drawn into another European war, and thereby provided profoundly little money to upgrade our 1920s level of a military. Lt. Kelsey was joined by Lt. Gordon Saville in a dance around a recalcitrant Congress in actually convincing the Army that they really did need a modern fighter.

The word “fighter” wasn’t used. As far as the Brass was concerned, their tactical paradigm was firmly rooted in the 20s, and that was in spite of some lessons that should have been taken from what happened during the Spanish Civil War (and that was true for more than just the Air Corps…armor ignored these lessons as well). The Brass really did want a single-seat fighter, armed with .30 caliber machine guns that were restricted to 500 pounds of arms and a powerplant less than 1000 hp. Kelsey and Saville were thinking more in terms of .50 caliber machine guns, 1000 pound of arms, and a 1500 hp.

A two-part proposal was solicited, one part for a single engine fighter…er…interceptor, and a twin engine interceptor. To give you some idea as to the thinking of the dinosaurs in charge, drop tanks were administratively banned. (I have no idea why, but yeah…they were banned. I think the only reason the US wasn’t rolled over as quickly as France was when WWII kicked off, because the Brass in both countries had their heads stuck firmly in WWI doctrine, was because France wasn’t separated from belligerents by an ocean or two the way the US is.) Tricycle landing gear and a large fuel capacity were specified as preferred.

There is a fascinating analysis of the P-38 here: http://www.ausairpower.net/P-38-Analysis.html

The single seat fighter contract ended up going to Bell who produced the P-39 (and history has not treated that aircraft kindly), Lockheed’s proposal, Model 22, was awarded the twin engine contract.

She was sleek, shiny, and fast. Armament was intended to be four fifty caliber machine guns and a 30mm cannon. All the guns were to be in the nose of the pod between the two engines and this meant that if the pilot were hitting with one gun, he was hitting with all his guns, something that aircraft with their armament in the wings couldn’t count on. With the guns in the wings, they had to be aligned so that they aimed slightly towards the center of the flight path at a place called the point of convergence…and if the guns were fired too close or too far away from that point, not all the rounds could hit the target…circumstances the P-38 never dealt with.

It was decided that this shiny, radically different, and FAST aircraft was to attempt to break the cross-country speed record. (Something that some sources have said was decided at the last minute…like when Lt. Kelsey landed in Dayton, Ohio to refuel, he was told to hurry it up, get back in the air, and try to get to March Field and break the transcontinental record kind of last minute.) (Interesting note…the transcontinental record is held by another Lockheed/Kelly Johnson creation at present, the SR-71 Blackbird.) A long approach to March Field ended up icing the carburetors resulting a consequent loss of power when the carburetors didn’t respond to the throttles, and Kelsey bellied in on a golf course (sustaining minor injuries), wrecking the prototype:

The Brass, however, was suitably impressed by this new interceptor that they ordered thirteen pre-production aircraft for further testing based on tests already completed. This model was designated YP-38 and any similarity between the YP-38 and the XP-38 was incidental. They were two very different aircraft utilizing different engines (Allison engines in both variants) and engine cowlings.

The British and French were both very interested in this hot new aircraft and placed orders for them, looking for a non-turbocharged version using the same Allison engine, the V1710 (neither the British nor French seemed to understand that using the V1710 without turbochargers and without the counter rotating propellers would result in a very different aircraft with very difference performance characteristics). This variant used engine cowlings that were more like the XP-38, being tightly wrapped around the V1710 engines. The Brits ordered 667 (Lockheed thought that, maybe, the US would order about 60), the Lockheed model number M322B, and the French version was M322F. France was overrun by the Wehrmacht before any M322F was delivered and the Brits (who, thankfully, called it the Lightning instead of the Atlanta that Lockheed was using) cancelled their order after only a few M322B Lightnings were delivered in their caponized state. The Luftwaffe’s air assault (eventually called the Battle of Britain) showed the British that a low altitude fighter, which the Curtiss P-40 Tomahawk was well known to be (and the specific aircraft the Brits wanted, which led North American Aviation to build what became the P-51), was of no use in the present war. The majority of the British order was rejected by the British and was retained in the US for training low-hour pilots in the demanding task of handling this complicated, hot, and huge, bird. Some of the 322B Lightnings had their same-rotation engines replaced with counter-rotating engines (the latter requiring different engine cowlings than the 322B’s same-rotation engines…none of the 322s were turbocharged).

The first production Lightning was the P-38 with no suffix. It was armed with four .50 caliber machine guns, carried 200 rounds for each gun, and though intended to also be fitted with a 37mm cannon, few were. 29 were produced and assigned, along with YP-38s, to testing and training duties. They were eventually redesignated RP-38, restricted to non-combat duties, and were not considered combat capable.

The first Lightnings that were deemed “combat capable,” though that wasn’t really the case due to various tactical equipment requirements not installed, was the P-38D. The D model didn’t have the cannon fitted, though it did, unlike the earlier variants, have a low-pressure oxygen system, armor plate, and self-sealing fuel tanks. It was armed with four .50 caliber machine guns but they all extended the same distance from the nose, unlike all subsequent variants that had the guns mounted in a staggered fashion. The D also saw the addition of wing-root fillets that, unlike the mass balancers that the Army insisted be added to the elevators, solved the elevator buffeting problem (just as Kelly told the Army it would, though the mass balancers stayed on every variant of the P-38). 36 D models were produced as part of the initial order of 66 aircraft and were assigned to 54th Fighter Squadron and sent to Alaska and some were sent to Iceland with the 27th Fighter Squadron. 36 were produced.

The P-38E was the first fully equipped and combat-ready Lightning, having had over 2000 changes to get the aircraft to get to this state. The 37mm cannon was replaced by a 20mm cannon, the electrical and hydraulic systems were improved, better radio and communications equipment was installed, as were better flight instruments. The drag link on the nose gear was redesigned, moving it from the front of the nose gear strut to the rear, a move that allowed the ammunition load to increase from 200 rounds to 500 rounds per gun. Single scoops over the turbocharger intakes were replaced by smaller individual scoops.

This was to be a continued state with the P-38. Each subsequent variant was improved over the previous variant. The canopy was changed to open rearward instead of to the right side. The main wing spar was strengthened (to carry drop tanks and bombs and even torpedoes were tested), engine controls were simplified to lessen the pilot’s workload (and on this aircraft, the workload was high), the turbo intercoolers were moved from inside the leading edge of the wings to a more functional location in chin scoops under the propeller spinners, resulting in the ability to use the later, more powerful Allison engines at full rated power, instead of choking them back so as not to overtax the intercoolers (which could explode if pushed too hard…not a good idea in general and a bad idea given that they were located at the leading edge of the wings…and the space formerly used for the inefficient intercoolers was instead used for additional fuel), the P-38 could dive so fast that compressibility, where the airflow over the top of the wings de-laminated and caused a high pressure area over the wings instead of the lift-producing low pressure area, which resulted in large, P-38-shaped craters in the ground when pilots ran out of altitude before they could regain control. With the L variant, electronically operated “dive flaps,” more like small flaps, were installed that eliminated the airflow’s de-lamination and subsequent loss of pitch control. 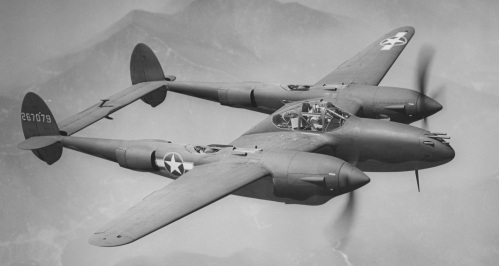 The P-38L was the last production variant (the P-38M night fighters were conversions of P-38Ls) as well as the most numerous with 3924 produced. It was visually very similar to the J variant, the primary difference being a pair of 1600 hp Allison V17140-F30 engines, hydraulically boosted ailerons, and “dive flaps” to counter the compressibility problems that had plagued the P-38 from its beginning.

Also, using lower engine speeds with higher boost settings and coarser prop settings, the P-38 was able to almost double its range (It seems that this was at the suggestion of Charles Lindbergh who operated as a civilian tech rep for United Aircraft).

As the most recognizable allied aircraft, the P-38 was tasked with air cover over the Normandy beaches on D-Day.

The P-38 Lightning was the only US fighter that was produced before and throughout WWII.